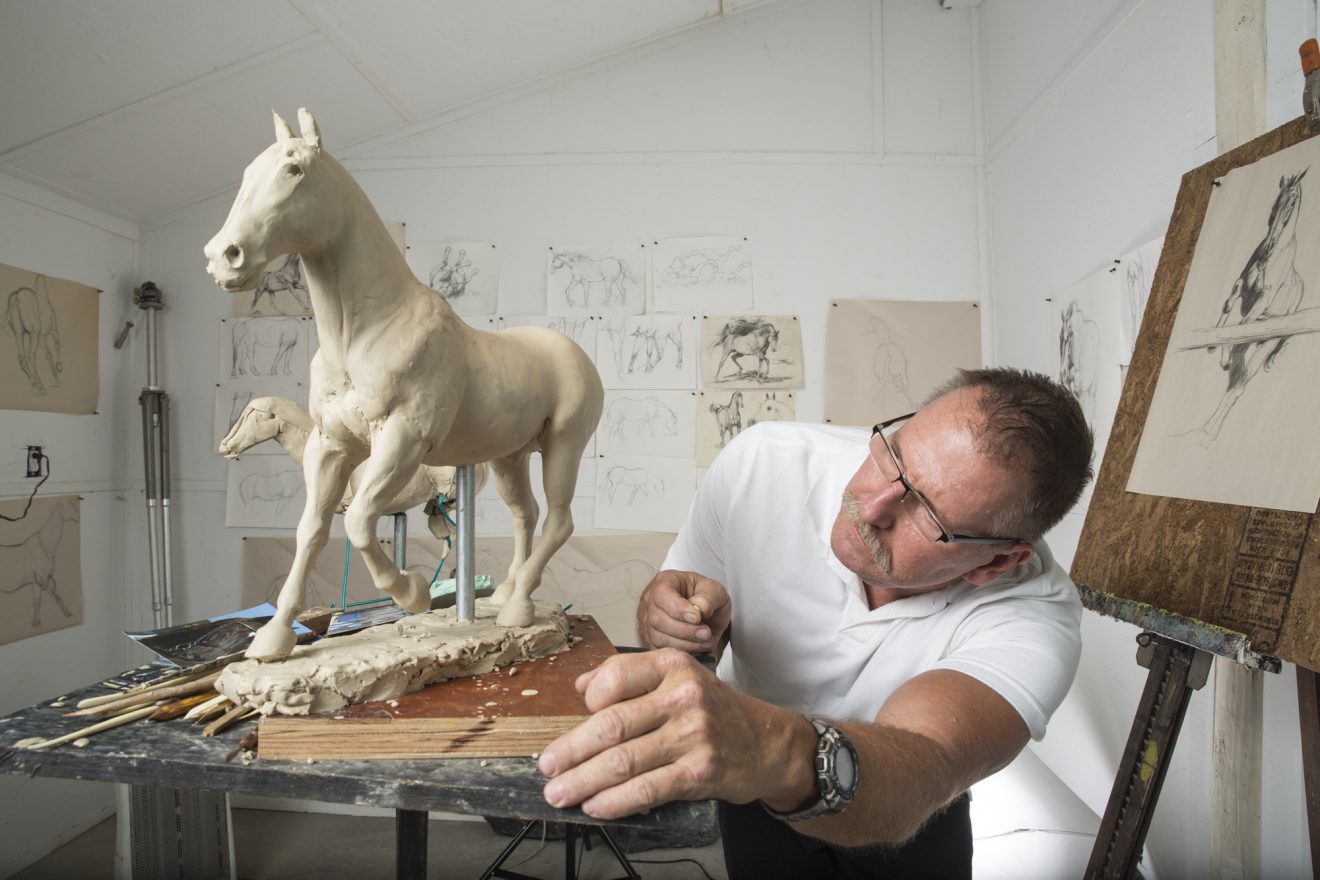 “You have to get to that place where it just happens, where it flows. Whether it’s a human figure or horses, it’s an aspect beyond the visual. It’s the spiritual, and that’s the part I just open up to. That’s when it’s the best.” – Vic

Sculptor, Vic McCallum, has created art that graces both private collections and public spaces.  He is a figurative sculptor that encompasses various forms of life, including humans and animals to angels and mythological figures. Moreover, his commissioned pieces encompass a creative element of telling a story through the art, capturing movement ambiguous to the diverse interpretation eminent by the viewer, yet may be separate from how the artist originally intended for the art to be perceived.   All of the arts are akin to one another creatively, and as a sculptor, Vic thinks analogously in terms of a musical symphony when he is working; defining the balance of large movements synonymously with the minute  subtleties, profoundly establishing when to define the finished piece and knowing how to say the most with the least.

Depicting different forms of wildlife, including birds of prey, wolves, and their morphology is an integral part in Vic’s work. Specifically, a creature that encompasses a wide gamut of form can be found in horses.  The dependency of the horse is parallel with the history of man in that they are tied together until the last century, wherein technology essentially removed man from nature.   Unfortunately, horses are not an integral part of our modern day societies’ dependency in our industry and economy, even though they were previously essential in the areas of agriculture, transportation, and even war.

The equine form contains an intriguing aspect of biology as it traverses between hot-blooded to cold-blooded subspecies and a myriad of types in between; diversifying form, aesthetic, and function. Characterizing a Clydesdale to an Arabian horse, an individual can spend an entire lifetime depicting the subtle differences in anatomy in the biomechanics of motion.  What is sought out in a horse is a subjective to individual ideology that people have pursued throughout the centuries. Essentially, Vic is continuously in the process of discovering the subtle differences of horses even within the same breed, given that they can be as individual as people.

Vic received a Master of Fine Arts degree at the University of Georgia while studying under renowned sculptor Professor William J. Thompson, and has been a figurative sculptor for over thirty years specializing in large memorials in the public, corporate, and private world.